Today we’re releasing image avatars, a new feature we’ve been testing in our labs section. They come in 2 flavours, public and private, and look like this: 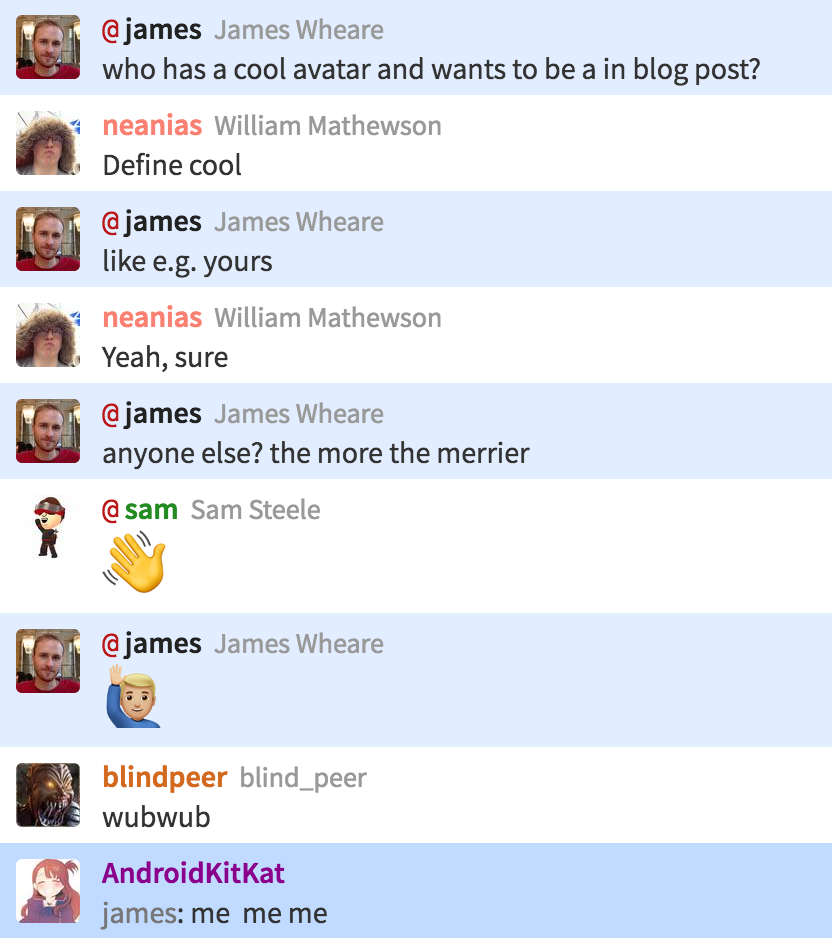 You’ll need to make sure the “User icons” setting is switched on in Layout & Design to see avatars. There’s also a separate setting to disable image avatars completely.

You can click on an avatar or nickname to see a larger version of it in the context menu. Avatars will also appear at the top of private messages.

A public avatar will work on most IRC networks, using an image tied to your user ID, a bit like a gravatar.

Upload a public avatar from your account settings and it’ll be visible to other IRCCloud users on any server based on your ident/hostmask.

Private avatars are only available on private team servers for now, and you can use a different image for each team.

Choose a team avatar by clicking the user icon next to your nickname in the input box.

We use the metadata framework to set your avatar to an unguessable URL, that won’t be published outside of the team.

If you’re running your own bot on a team server, you can give it an avatar by uploading an image and configuring it to send the following command on connect:

Public avatars work differently. They rely on a URL that maps an image to your user ID (the bit in your ident/hostmask that looks like sid3 or uid7). We use this to detect other IRCCloud users and check whether they have a public avatar by loading that URL, e.g. https://static.irccloud-cdn.com/avatar-redirect/3.

We don’t expect other IRC clients to support public avatars, since they only work for IRCCloud users, but they could if they wanted to. It’s intended as a stop-gap until IRCv3 metadata is more widely adopted, and a way for people to try out and get used to avatars on IRC.

As usual, let us know what you think on Twitter, email or IRC.